We use cookies to make your experience of using our website better. To comply with the e-Privacy Directive we need to ask your consent to set these cookies.

How to choose the best tires for your car, SUV, or truck

It doesn't pay to skimp when buying replacement tires 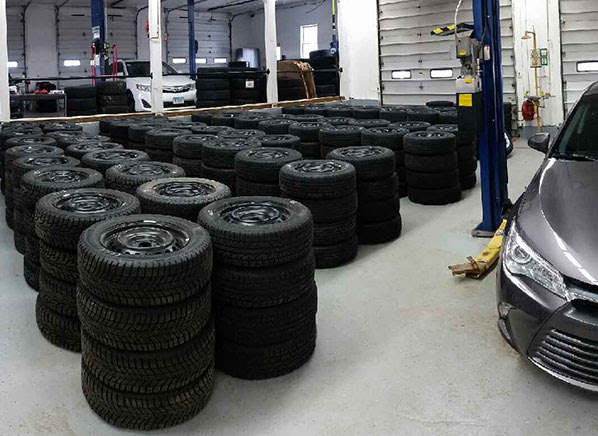 Shopping for new tires can be a daunting task. There’s no way to tell which one provides the best grip, the longest life, or the shortest stopping distance by sight or feel. That’s why Consumer Reports tests 50 or more tire models each year, with each going through as many as 14 rigorous evaluations.

In recent years, we’ve found you generally get what you pay for. No matter the type, tires that combine the best grip with the longest tread life may cost a little more, but they are worth the extra money in the long run.

For example, our tests have shown the best all-season tires can last as many as 97,000 miles; the worst would need replacing after 55,000 miles. It’s pretty straightforward: a $130 tire that will last twice as long as an $87 tire is a better bet, assuming other factors are equal. Still, the cheaper tire may be just fine if you won’t be keeping your car for long. Many tires have a pro-rated tread-wear warranty—meaning the balance of undriven miles will be credited toward the cost of the new tire. The downside: You’re still on the hook for the cost of installation.

But as your tires lose tread over tens of thousands of miles of wear, they behave more like low-rolling resistance tires. So the mileage you get with brand-new, low-resistance tires may actually be worse than the old, end-of-life tires you are replacing.

Another big factor: Proper inflation. Because an underinflated tire will sap your mpg, check your tire pressure monthly for optimum fuel efficiency.

When replacing tires, we recommend sticking to the same type and size tire that originally came on your car. First, check the Ratings for ones that provide good braking and handling capabilities as well as good hydroplaning resistance, because that can help you avoid an accident. After that, look for models rated highly in areas important to you, such as winter grip, tread life, ride comfort, and rolling resistance.

With the majority of car-based SUVs, known as crossovers, spending their time on the streets instead of bounding over hills and through valleys, manufacturers are equipping them with the similar all-season tires that are typically found on passenger cars.

While regular all-season tires typically come in T-speed ratings (up to 118 mph), many new cars with performance all-season tires in H- and V-speed ratings (with ceilings of 130 mph and 149 mph, respectively). These deliver better grip, but at the cost of some tread life. Most don’t carry a price penalty for performance, and there are some bargains available. A few also offer good snow and ice traction.

While you may see these advertised at some enticing prices, keep in mind that it costs more for cars and trucks that have larger tire sizes, prices vary by retailer, and sales are common.

Ultra-high performance (UHP) tires are designed to optimize cornering, braking, and handling. While they are increasingly found on a wide variety of cars, only a few of the most sports-oriented SUVs are equipped with them.

They deliver maximum grip with short, stiffer sidewalls that minimize flexing while cornering. The trade-offs are typically a harsher ride, shorter tread life, and a warranty of no more than 60,000 miles, if they offer one at all.

We tested models with speed ratings of W, Y, and Z, meaning they’re capable of sustained speeds of more than 149 mph. It sounds outlandish, sure. But our tests have shown that even at normal highway speeds, tires with higher speed ratings tend to have better cornering grip, braking, and handling.

Big SUVs and pickup trucks use tires specifically designed for trucks, although many can also be used on crossovers.

While mainstream car tires typically have a tread-wear warranty of 75,000 to 100,000 miles, a warranty for an all-season or all-terrain SUV/truck tire is typically 40,000 to 70,000 miles. That’s because these tires are designed for the rigors of towing and carrying heavy loads, and all-terrain tires also provide off-road grip.

Stick with your speed rating

If your car came with all-season tires (S- or T-speed-rated tires can sustain a maximum speed of up to 112 and 118 mph, respectively), you might be tempted to move up to performance H- or V-rated tires (which are designed for up to 130 and 149 mph, respectively) for better cornering grip and improved handling. But keep in mind that the trade-off may be shorter tread life and may not do as well in winter conditions, if that’s important to you.

You might also be tempted to downgrade your tires to a lower speed rating than your original tires, to get longer tread life. But we advise against doing that, because those all-season tires with a lower speed rating may not handle heat buildup as well—especially when they are installed on higher-performance vehicles—and that can be a safety concern. And there is little price advantage to downgrading. In buying our test tires, we saw that tire size has a greater impact on price differences than speed ratings.

Know when to replace

Tires are one of the few safety-related systems you have a choice about, and one of the few that can noticeably change your car’s handling and braking capabilities. Tires can greatly affect how your car rides, and how well it keeps its footing on wet roads. Because of this, keeping them well maintained is important, and replacing them as they wear out is equally crucial.

When your tire has reached a tread depth of 2/32 inch, it is legally worn out in most states, and should be replaced. At that depth the tire’s wet grip, snow traction, and ability to resist hydroplaning is very limited.

Consumers should start shopping for tires before they are worn out, when tread depth approaches 4/32 inch in any one groove. That happens to be the same distance on a quarter between George Washington’s head and the edge of the coin. Put the coin, head down, into the tread grooves. If you can see the top of George’s head, then it’s time to start shopping: Your tires have some all-weather grip remaining.

The single most important step you can take to make your tires last longer and run safely is to keep them inflated to the proper pressure. Many people neglect to do this and it’s a mistake.

Underinflated tires both wear faster and build up heat quicker than properly-inflated tires. Excessive heat buildup can contribute to a tire failure. Recommended inflation pressure is found on a placard in the vehicle, usually located on the driver’s door jamb, or in the owner’s manual. Don’t inflate to the pressure on the tire’s sidewall; that is the maximum inflation pressure.

Between traditional tire stores, large retailers, big-box superstores, and the Internet, you have ample sources with which to compare prices for the tires you want. We recommend replacing all four tires at the same time for the best balance of handling.